Click here to see the specific promotions that apply to this departure.*

*Restrictions apply. Promotions vary by sailing and not all of the above mentioned promotions apply on every sailing. Savings are reflected in the fares in the Pricing and Staterooms tab. Offers are subject to availability, capacity controlled and may be withdrawn at any time.

READY TO PLAN YOUR SHORE EXCURSIONS?

Piraeus is the seaport for Athens, the capital of western civilization, which boasts a fantastic mix of classical ruins and vivacious modern life. Climb the hill of Acropolis to wonder at the Parthenon, join the lively Athenians in Constitution Square, and find a welcoming taverna for spirited bizouki music, plenty of ouzo to drink, and energetic Greek dancing. Piraeus is the largest harbor in the country. The white chapel of St. George at its summit has a theater bearing the same name. The hill of Nymphs is the site of a planetarium, which is located above magnificent Thesseio temple. Among all of these hills, Acropolis is the one that glorified Athens and the whole Greek world and became the symbol of the western civilization. Bays and small rocky or sandy coves dot the area and during the summer are filled with Athenians and foreigners enjoying their beauty.

Athens at a Glance - 3 hours

Athens - The Athenian Riviera & the Temple of Poseidon - 4 hours

Santorini is everything that has made the Greek islands legendary. The world famous island of Santorini is the southern most island of the Cycladic group in the Aegean Sea, and is located north of Crete. Its population is distributed among thirteen villages and just exceeds nine thousand. The marvelous dry climate and unbroken sunshine create year around conditions which are perfect for observation, photographs and videos under an extraordinary variety of natural lights and colors.

Rhodes is one of Greece’s favored vacation centers and was an important cultural center with a well-known School of Rhetoric attended by such greats as Cicero and Caesar. Rhodes' most famous attractions originated with the Knights of St. John, who occupied parts of the island from 1310 to 1522 and left a medieval town, dominated by the Palace of the Grand Masters and Knights' Hospital, which houses an Archaeological Museum with interesting exhibits of national archaeological finds. Rhodes has inspired many artists. The Old Town offers shopping opportunities and lively nightlife. At Mount Filerimos a church has been built on the site of an ancient temple. A popular excursion is to the charming village of Lindos. Its premier attraction, the ancient acropolis, stands atop sheer cliffs. Walls of a 13th-century Crusader castle enclose the site. Today, the winding path up to the acropolis is lined by stalls, where locals sell lace tablecloths and souvenirs. Mandraki Harbor's entrance is flanked by stone columns topped by figures of a stag and a hind, the town's heraldic animals.

Valletta is the capital of Malta. This remarkable fortified city with its massive bastions followed the most advanced Renaissance ideas in town planning, with streets laid straight on a grid looking over the Grand Harbour. Outside the 'City Gate' is the famous Triton Fountain. 'City Gate' has public buses and vendors selling soft drinks and all sorts of traditional fresh Maltese bread and sweets. Freedom Square shows an extraordinary capital with buildings of fine architecture of different tastes and styles ranging from the Mannerism to Baroque to Rococo to Neoclassicism. Valletta is a fascinating city for wandering around looking at what used to be the Knight's own cathedrals and Auberges. The city's backbone is Republic Street, which runs straight through the city center to Fort St. Elmo. Valletta has several narrow, steep side streets decorated with traditional Maltese pastel colored balconies and a statue on almost every street corner. There are plenty of shops, cafes, and restaurants to choose from.

It is known for its beautiful beaches and crystal clear waters of the Ionian Sea. It has a small, but prosperous fishing port. There are many hotels and restaurants and the town is ten minutes away from another of Sicily's most important tourist destinations Taormina.

Sorrento is a town of extraordinary beauty and is known as a popular gateway to Italy's most spectacular stretch of coastline - the Amalfi Drive lined with fishing villages and famous resorts. The seaside resort of Amalfi sits with weathered houses scrambling up steep cliffs. Visitors marvel at its location and its magnificent cathedral. The religious sanctuary of Cloister of St. Francis is worth a visit. The tiny, exclusive resort of Positano has its famous world-class hotel, San Pietro. Excavations of the ruined city of Pompeii, which was destroyed in 79 A.D. during the disastrous eruption of Mount Vesuvius, give visitors a vivid impression of life in a very wealthy ancient city and the tragic end of its population. The Isle of Capri ranks as one of the most beautiful islands and has captured visitors for centuries with excellent climate, spectacular landscape and fantastic sea caverns. Capri has lavish villas, elegant hotels, chic boutiques and quaint restaurants. Museo Correale contains a death mask of poet Torquato Tasso and some special editions of his works, pictures, furniture and porcelain.

Civitavecchia is the port city for Rome. Rome has always been and remains the Eternal City. With its splendid churches, ancient monuments and palaces, spacious parks, tree-lined boulevards, fountains, outdoor cafés and elegant shops, Rome is one of the world’s most attractive cities. Among the most famous monuments is the Colosseum where spectators watched combats between muscled gladiators and ferocious animals. Stop to see the remains of the Forum, once a political and commercial center. Rome’s squares were enhanced with such imposing structures as the Vittorio Emanuele Monument and grandiose fountains like the Fontana di Trevi. Awe at Christendom’s most magnificent church, the Sistine Chapel. The busy square Piazza Venezia is easily recognized by its imposing Vittorio Emanuele II Monument. Take a stroll to Rome's famous Trevi Fountain. Vatican City is the site of lovely St. Peter's Square and St. Peter's Basilica, where for 200 years, Renaissance masters worked on its design and created an unparalleled masterpiece. Visit Vatican Museum.

Rome and the Vatican City: 8-9 hours 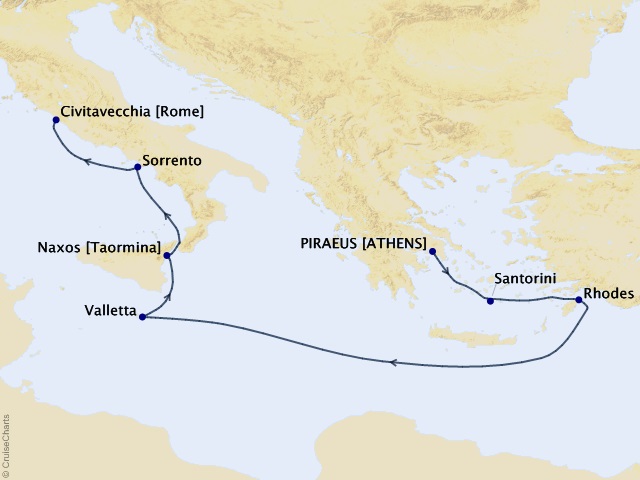 Itinerary subject to change without notice. Please confirm itinerary at time of booking.

Cruise port, security and handling fees of $315, transfers, airfare, government fees and taxes are additional for all guests.

Cruise-Only fares are per person in U.S. dollars, double occupancy and do not include cruise port, security and handling charges. Solo Traveler Fares are available upon request. All offers may not be combinable with other promotions, apply to first two

All prices per person and in USD unless otherwise stated.

Reference this number when contacting our agency so we may better serve you. Also keeping this number handy will allow you to locate this document again quickly.

Information and pricing is subject to change without notice. While we do our very best to ensure that information and pricing appearing in this website is complete and accurate, we cannot be responsible for incomplete and inaccurate representations, which may or may not be under our control. In the event of a pricing error, misrepresentation or omission, we reserve the right to adjust the pricing or make any other corrections.